(MAR 02) MAC GOT CRUSHED LAST NIGHT - A RARE NIGHT FOR THE MAC AS HE HAD SOME HEAVY LOSSES, NOT BEING PHASED IS THE NAME OF THE GAME TONIGHT!! 3 SPECIAL RELEASE PICKS + 3 RED ALERT PLAYS STARTS @ 7:00!

Red Alert Patreon Members now get The MAC'S personal wagers as a units per play system, betting the strongest information and games with odds that have very best optimal value/risk reward. The Mac will once again prove why they continuously acclaim him to be a National Treasure as he will cracking them open and cleaning them out with 3 Red Alerts Picks Tonight! NBA Red Alert - 7:30 Memphis Grizzlies +2 vs Atlanta Hawks -2 + 2 Big Game Red Alert CBB Picks and for Top Rated Patrons, MAC is moving heavy on special release action, 2 CBB bets and a NHL Major Move Alert on the Colorado Avalanche vs Detroit Red Wings total set at 5.5! Roland is anticipating a huge rebound day, and Red Alerts Picks are cash in the bank making interest!

(MAR 02) MAC GOT HIS LAST NIGHT - CBB HUSH MONEY ACTION NOW 37-15 FOR THE SEASON - MAC will be getting it done the way it's supposed to be done with 3 special release games on tap tonight! 1 NHL Major Move Alert - 7:38 Colorado Avalanche vs Detroit Red Wings & 2 Exclusive NCAAB Plays - HUSH MONEY ACTION - 9:00 Texas Tech +7.5 vs Baylor -7.5 + A Backroom Info Angle that will be another classic example of why they dub Roland MAC McGuillaman the most venerable betting source on the internet. The MAC has been picking off games all season and March Madness is his specialty, ripping down office pools and NCAAB March Madness Contests is just what the MAC does.

The stock market is crashing and MAC's answering back with the very best college basketball sports investments available - MAC has the play at Patreon and on the Red Pass tonight - $25.00 Gets all MAC's Top Rated & Special Release Picks for 1 Month - $25.00 1 Month of all exclusive info CBB picks!

Tonight our Top Rated Exclusive Play Members will be getting in on MAC'S NCAAB MAJOR MOVE PLAY on the 4:00 SOUTHERN MISS vs UTEP O/U 129 USA Conference show down plus all of tonight's Red Alert College Basketball & NBA Predictions.

THE MAC HAS NBA GAME RED ALERT PLAY - 7:30 Memphis Grizzlies +2 vs Atlanta Hawks -2 a Low Key NBA Game - A 5 UNIT play that holds the value we strive for when researching odds, trends and stats - MAC has been hitting the NBA Action hard and averaging around 63% this year for NBA bettors.


The NBA is great but College Basketball Season is how we're making money, with dozens of games going off it's not easy for the average bettor to find a decent game to bet on, that's what RedAlertWagers.com is here for, we hit the angles and have the resources. Our Sports Consensus Groups are now focused on March Madness and we will be picking off NBA & NHL special release plays as we go! RedAlertWagers.com sports betting predictions are going the distance and there is no finish line!!


The MAC is cocked, locked, & loaded as he has received what people call the industry standard of advice from national sports syndicates and consensus groups across the country MAC's CBB RED ALERTS are only available on Patreon.com and are included in the 1 Day Red Pass!

A lot of guys shoot a arrow and paint a bulls-eye around it afterwards, not The Mac...THE MAC proves that he has tapped directly into the mainframe and shows it! Call The RedAlertWagers.com late play phone line - Red Line (Toll-Free @ 1-844-334-2613)

THE MAC recommends XBet.ag to place your bets as well as MyBookie.ag you will find the best odds on everything from sports to current affairs. If you want to wager on who will be the next pope or how many rounds will the big fight take (DEONTAY WILDER -125 vs TYSON FURY -105 PART 3), just check out XBet.ag for all your gambling and wagering needs. 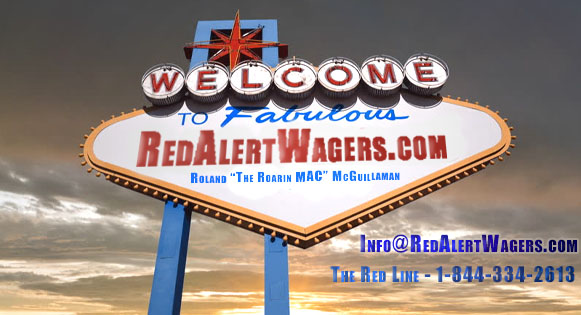 
Red Alert Wagers SS LLC Exclusive Releases & Red Alert Free Plays exhibit why Roland "The Roarin MAC" McGuillaman's reputation as THE PAYMASTER is galvanized in the gambling underworld as a dangerous low key sharp! He doesn't know where you been, but The MACS been dicking down the sports betting game since the Star Dust was the place to get a high end hooker and a cocktail! Baseball is almost back and MAC has a lean on the Philadelphia Phillies +110 vs Atlanta Braves -130 6:00 Spring Training game + 2 Basketball MAC ATTACK Picks and some look ahead Exclusive MMA Releases today! March Madness is getting closer and MAC has been the man to go to for brackets, bust open your office pools and take all you're dorky co-workers cash with professional top rated March Madness Picks and Vegas tournament grade CBB bracket.

Not only is Roland calling games like a savage, The Mac is making record breaking earnings in 2020 - College Hoops Action is now hitting 71% and growing, hunting for the very best selections and odds is time consuming, chasing sharps and getting sportsbook alerts when whales lay heavy is a full time job, RedAlertWagers.com has been in the sports betting business to be in the sports betting business - PATREON MEMBERSHIPS START @ $7.00 - Red Alert Plays - All Games are released to the public the next day + MAC puts out a daily recap newsletter with free predictions and trends for the best games on the board!

For Entertainment Purposes Only! See our TOS